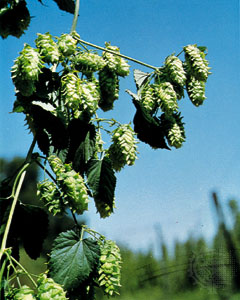 This is a guide primarily for beer drinkers and not brewers, however some homebrewers may find this guide useful. Hops are cultivated flowers of the genus Humulus. The common hop is a dioecious (plants are usually either male or female) perennial with rough stems that can grow over twenty five feet long and penetrate the soil ten feet or more. Hops are grown all over the world and are most popular in moist, but well drained climates. Hops in the United States are typically grown in the summer months and are irrigated, while hops in England have sufficient water during the growing season.

Hops haven't always been added to beer - they've only been part of the standard recipe for about 1200 years. Hops were added to beer to not only provide a bitter flavor, but to also act as a preservative. The bitter flavor is extracted from the hop during the boiling process, it is at this time which insoluble alpha acids are isomerized into more soluble iso-alpha acids. The hop cone also produces a volatile oil which brewers use to add hop aroma. Brewers will add aromatic hops to the brewing kettle anywhere from one to fifteen minutes before cooling to maximize flavor and aroma. Because the aromatic principles are more fragile than the bittering principles and are damaged by heat, aromatic yield decreases as boil time increases.

Many different beers use different types of hops, and some brewers combine different hops at different stages of the brewing process. Even the most casual beer drinker will have at some point heard of a hop name mentioned. You may have also heard of hops alpha acid percentage; alpha acid contributes to the bitter flavor of the beer. The higher the alpha acide percentage, the more bitter the hop and beer. Below are a list of hops with their alpha acid percentage and a description of their usage and flavor.

Brewer’s Gold – Mainly a bittering hop with a soft bitterness. Sometimes used an aroma variety in conjunction with noble hops. Related to Bullion.

Challenger – Soft mixed use English hop with a spicy character.

Chinook – Big, rich, robust bitterness, with woody aroma characteristics that are best used in a blend with other American hops. Examples include Fish Leviathan (bittering only),

Crystal – Mixed use hop that is a hybrid of German and American varieties. Quite aromatic, fruity. Examples include Rogue Brutal Bitter & Honey Cream Ale.

First Gold – A dwarf hop, predicted by many in the British industry for future success. It is like a spicier Golding, with a higher alpha and slightly richer bitterness as well.

Fuggles – English mainstay, though a large crop is also produced in the US. Woodsier character that Goldings. Though considered the less refined of the two by some, others prefer its juicier, more foresty character. Examples include North Coast Old Stock Ale,

Hallertau Hersbrucker – Common in German pilsners, this noble hop has a grassy, hay-like aroma, and is seldom used for bittering purposes.

Hallertau Mittelfrüh – Those who remember Sam Adams Lager in its earliest days will remember the elegant spicy hop character contributed by the Mittelfrüh. That character is not as easy to find in that beer today, but is still there in very fresh examples. It is still used for some smaller German beers as well.

Lublin – The grassy, hay-like signature of Polish lagers. The bitterness is slightly harsher than noble varieties, but the aroma is a little bit softer.

Mount Hood – Bred from Hallertau, but blander. This hop is frequently used, but seldom lends a distinctive signature. For this reason, it is often used in styles that require only a subtle hop aroma.

Northern Brewer – Known as dual-purpose hop, but best suited for bittering. Versatile, lending a moderate bitterness. Aroma wise it’s quite mellow, and usually used in combination with other hops. Anchor Steam, however, is an all-Northern Brewer beer.

Nugget – Bittering variety. Nuggets generally have a poor reputation as being cheap and unrefined, but do have a pronounced herbal aroma. Examples include Sierra Nevada Bigfoot (bittering only),

Pacific Gem – High alpha variety from New Zealand, but also contributes a berryish aroma. This, along with Hallertauer, are frequently organically grown in New Zealand, so this is most likely to be found in organic beers outside of NZ. Has a woody, berryish note.

Perle – One of the least distinctive German hops, the dual-purpose Perle is often found in conjunction with other hops. Wet hay is a character I associate with Perle.

Pride of Ringwood - Ubiquitous Australian hop. At one time, this was a high-alpha variety, but has been long surpassed. Considered by some rather malodorous, PoR hasn't caught on outside of the Australian lager world. Examples include Cooper’s Sparkling, Foster’s.

Progress – Developed as a replacement for Fuggles, this has a higher alpha rating, and is often found in combination with Goldings.

Saaz – The Bohemian hop, used in almost all Czech pilsners. It gives a soft bitterness, so IBUs can be high without harshness. The aroma is famous, and a fresh Pilsner Urquell is still the best place to learn it (try this beer on tap or in a can to guarantee lack of skunkage). Other beers include Bell’s Oberon, Rogue Half-A-Weizen, Victory Prima Pils or most Czech pilsners.

Simcoe - High alpha variety with piney notes and a rounded bitterness. Has made increasing appearances the past couple of years, in both pilsners and ales.

Spalt - Noble hop, with a fine, spicy aroma. Used in all manner of German-style beers both ale and lager. Is the signature hop for altbier.

Strisselspalt - Classic French aroma hop, used mainly in lagers. Fairly neutral character can be tough to detect, but is similar to Herbrucker.

Styrian Goldings – Actually derived from Fuggles, but grown in more continental conditions. I find them spicier, and more elegant than Fuggles, while retaining the delicious woodsy character. Used in a wide range of beers, from English ales to witbier and both English and Belgian strong ales. Examples include Timothy Taylor’s Landlord

Tettnang – Classic hop of North German pilsners, Tettnang are used for both bittering and aroma (though the latter is often in conjunction with some form of Hallertau). Bitterness from Tettnang is rich, yet soft, so brewers can really crank up the IBUs without rendering the beer astringent.

Warrior - New "big mamma jamma" bittering hop, whose popularity is on the rise due to slightly softer bitterness than some its contemporaries and lack of aroma properties. It may walk softly, but at 18% a/a it still carries a big stick.

Willamette – Mild aroma hop, with a herbal, sometimes gently fruity character. Widely used, but not bombastic enough to be recognized by most tasters. Sniff some fresh ones at the homebrew store to help you learn the Willamette signature. Common in those brewpub golden ales we all know and love.